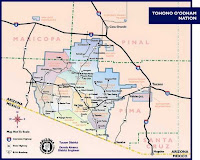 While lawmakers far, far away from the borderlands dictate to us what will happen in our own backyards - such as increased military presence, permanent roadblocks/checkpoints, several-hundred foot observation towers, increased roads and barriers across previously undisturbed land, etc. etc. etc. - the respect of indigenous people is being sacrificed.

The Tohono O'odham Nation (map to the right) is split in two by the current configuration of the International Border. With the egregious actions of the Department of Homeland Security continuing unabated, something terrible like this was bound to happen sooner or later.


On May 17th and May 21st of 2007 the remains of at least three humans were unearthed during the construction of a border zone “Vehicle Barrier” wall. These remains were found buried near the International Border, inside of Tohono O’odham Nation lands in Arizona.

The unearthed people are the direct ancestors of five families living in the Ali Jegk community of the Tohono O’odham Nation. The remains are currently in the possession of the tribal government’s cultural authority – an institution that has a non-O’odham director.

Initially, when the remains were unearthed during construction of the “Vehicle Barrier,” the tribal government authorities stopped the construction to investigate the findings. Unfortunately, they failed to protect the remains from desecration as is required of them under the Native American Graves Protection and Repatriation Act of 1990 (NAGPRA).

I urge you all to please sign the petition and spread the word that this type of disrespect is utterly unacceptable. Also, please contact Congressman Grijalva's office, if you're in CD87, and ask him to put pressure on the Department of Homeland Security to never make a mistake like this again.

The people within the nation will deal with their own internal politics with respect to the involvement of the Tribal Leadership, but we can put pressure on our end.

This makes me sick beyond belief.

“Why do these non-O’odham continue to mistreat us? We are humans, we do not go to their [Anglo] graves and dig them up and put them in boxes.”

Tip of the sombrero to Daniel Patterson for the heads up on this
Posted by Unknown at 9:25 AM