The Importance of Marching Against Arpaio

I was one of the thousands of human rights marchers on Saturday, January 16th in Phoenix, Arizona, united to protest the heinous actions of Sheriff Joe Arpaio. Unfortunately, I left my phone in the vehicle so wasn't able to tweet updates or photos throughout the event, but as I think about it a couple of days later, those things don't matter as much as what I've been seeing in the aftermath of the event. Arpaio's abuses are finally getting enough media attention to make his actions a political liability. Call it a gut feeling, but that's what I'm observing.

Sheriff Joe is a notorious media-hound. He is the first to admit that he relishes in the attention given to his anti-migrant, and by extension of his racism, anti-latino policies. His delusions of grandeur, however, are misplaced as media sources from all parts of the country show images from the march and include in their stories the various investigations that are exposing the violations of his law enforcement agency.

Sheriff under investigation
Critics have alleged racial profiling by deputies working in Arpaio's immigration efforts, which the sheriff denies. He says his deputies approach people when they have probable cause to believe they had committed crimes.

Ten months ago, Arpaio learned he was under investigation by the U.S. Justice Department for alleged discrimination and unconstitutional searches. He says the investigation was prompted by his immigration efforts, although federal authorities haven't provided details.

Since early 2008, Arpaio has run 13 immigration and crimes sweeps involving officers who flood a section of a city — in some cases heavily Latino areas — to seek out traffic violators and arrest other violators.

Arpaio's power to make federal immigration arrests was stripped away three months ago by officials in Washington, but he continues his immigration efforts through the enforcement of two state laws.

One of those "heavily Latino areas" is the Phoenix suburb of Guadalupe that was founded by Yaquis in the early 20th century. From the town's website:

Although Guadalupe didn't incorporate until 1975, our history dates back to 1907. Guadalupe is home to three cultures – with one of those cultures being the Yaqui Indians. The Yaqui Indians have endured many turbulent times beginning with wars fought against the Spanish and Mexicans. The Yaquis were trying to protect the land that they lived on near the Yaqui River in Sonora, Mexico. When Porforio Diaz defeated them, the Yaquis were sent down to the jungles of Yucatan. But during the Mexican Revolution, the Yaquis joined up with Pancho Villa. When Villa's army was defeated, the Yaquis headed to the United States for safety. Many of the Yaquis came up to the Salt River Valley to work on the construction of canals in the area. A community sprung up here – where we became Guadalupe.

In 2008, the mayor and council of Guadalupe had a public confrontation with Sheriff Joe after an immigration raid at the local Family Dollar convenience store. It was a high profile example of what the latino community in Maricopa County have long-believed: brown skin raises your likelihood of harassment from Arpaio's immigration witch hunt. He'd rather direct resources to targeting workers than apprehending violent criminals. Even the conservative Goldwater Institute understand this.

Immigration enforcement is important. But in its decision to add to its law-enforcement duties those of a “full-fl edged anti-illegal immigration agency,” MCSO has accomplished neither task well. By diverting precious law-enforcement resources on high-profile, extremely expensive, yet low-yielding immigration sweeps, MCSO has undermined its eff ectiveness in its core mission of protecting the lives and property of the people who look to it for protection. And by failing to
coordinate its raids with local police authorities, MCSO places law-enforcement officers and citizens at great risk.

Which is a big lie, of course.

I've heard a few times from national immigration organizers that in order to reign in Arpaio, the laws must be changed, but he has proven before that he'll operate in any manner he chooses by finding loopholes and cherry-picking laws that allow him to continue targeting migrant workers. Here was his response after DHS amended their 287g agreement with Maricopa County.

"I'm going to tell you something, Jay," he said to Lawrence. "I don't need the feds to do my crime suppression to opt to arrest illegals. I can do it without the federal authority, and I'm going to continue to do it. It makes no difference. It helps us. Because I don't have to do all the paperwork for the feds, number one. And number two, I won't be under their umbrella, their guidance. So I will operate the same way, nothing is going to change."

Those of us who marched understand this.

That's why it's important to come together in public like we did - to signal to other political leaders (and hopefully, Department of Justice officials) that Arpaio's actions are unacceptable.

As I wrote to an online colleague on Saturday night, each time the march is covered with commentary on the investigations and continue blowing the lid off the sheriff's abuses, the more politically toxic he becomes and the feds are forced to act. It is the only way he will be stopped, because it'll be a cold summer day in Phoenix before Sheriff Joe has a change of heart.

For latino families who live in Arpaio's jurisdication, that day of reckoning can't come too soon.
Posted by Unknown at 6:38 PM No comments: 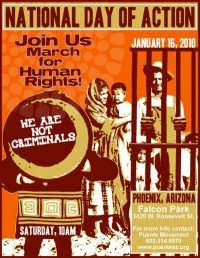 Join thousands of human rights activists as we gather in Phoenix, Arizona on Saturday, January 16th at 9AM. There will be a march from Falcon Park to the downtown complex that serves as headquarters for the notorious Sheriff Joe Arpaio.

Full information on the event can be found at the Puente AZ website. There is also a Facebook page devoted to the event.

Leading the march will be UFW matron Dolores Huerta, Rage Against the Machine's Zack de la Rocha, and internationally-famed singer Linda Ronstadt. There will also be a concert at the end of the march featuring Little Joe y La Familia.

This will be the second march I've attended to protest the human rights abuses of Sheriff Joe, who is under several federal investigations for racial profiling and harassment of political foes in Maricopa County.

Federal investigators are apparently looking into Arpaio's actions stemming from his anger over budget cuts handed down by county officials. The budget cuts were part of a long-running feud between Arpaio and county leaders.

In one instance, Arpaio is accused of investigating a $340 million project for a new courts building in downtown Phoenix because he thought that the money should instead be spent on plugging holes in his office's budget. In other cases, he sent deputies to workers' homes on nights and weekends.

"Their way of showing their displeasure was to investigate, using the criminal justice process on people who were simply doing their jobs," Smith said.

If you can't attend the march, please consider donating toward water bottles for the participants via the National Day Laborer Organizing Network
Posted by Unknown at 7:19 PM No comments: