Just got a knock on the door from three organizers with Mi Familia Vota. I'd like to extend my thanks to them for doing the hard work of door-to-door voter mobilization. They are working for more than voter registration, but also to educate the public on various ballot initiatives that will directly affect the latino community. In most cases, affect us detrimentally.

The country is stronger when we push for more people to become engaged. As their literature notes, a lot is at stake in November:

A lot is at stake in this election: high gas prices, the war, immigration. You should vote to protect the future of our families.

That's the dreary news, the good piece of it is that we can do something about it all: Vote.

And, perhaps more importantly: Organize.
Posted by Unknown at 6:46 PM No comments: 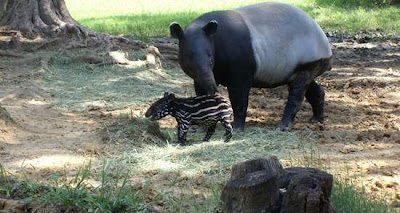 Proud parents Symphony and Larue welcome
their baby tapir to the Jackson Zoo
Posted by Unknown at 5:16 PM No comments:

An unabashed liberal and fighter for those who often have no voice on the Hill. This moment will always remain in my heart:

Rep. Stephanie Tubbs-Jones issuing a formal objection
to the 2004 Presidential Election results in Ohio.
Thank you for your service. My prayers are with your family and those who had the privilege to call you friend.
Posted by Unknown at 9:22 AM No comments:

Channel 8/KAET, based out of the campus of Arizona State University in Tempe, released polling for the Presidential Election showing McCain garnering 40%, with Obama at 30%, and undecideds at 28%. Pretty weak for a Senator in his home state, especially given these additional juicy nuggets from the breakdown:

The statewide telephone poll of 402 registered voters was conducted by the Walter Cronkite School of Journalism and Mass Communication at Arizona State University and Eight/KAET-TV. The survey has a sampling error of plus or minus 4.9 percentage points. The sample was 39 percent Republican, 33 percent Democrat and 29 percent Independents. Fifty-six percent of the interviews were conducted in Maricopa County, 19 percent in Pima County and 25 percent in Arizona’s other counties. Forty-seven percent of the voters interviewed are men and 53 percent are women.

If McCain is this anemic in Maricopa County (read: the Phoenix metro area) in a poll that oversamples Republicans, then Obama better get his Democratic rear-end to the Grand Canyon State for some appearances. I'd also suggest paying some attention to Pima County, since he has yet to come south of the Gila. His two previous gigs in AZ were in Tempe and Phoenix proper back during the primaries.

He'd also be smart to make some stops in Pinal County where one part of the expansive county is being hit hard by the mortgage crisis, and the other is ripe with rural, copper mining voters who are heavily unionized. It would help with the CD1 race that the indicted Renzi will be leaving wide open for a Dem. pickup as well as give him an opportunity to pay some attention to voters who are absolutely ignored by their political leaders at all levels.

Time to play some offense in McCain's neighborhood, Barack! His neighbors aren't too happy with him.
Posted by Unknown at 7:47 PM No comments:

For those of you in the Maricopa County slice of Arizona's 7th Congressional District, looks like a contingent of Baja Arizonans will be gathering to head up north on Sunday to assist Joe Arpaio with early retirement.

Please Join A Whole Lot of People for a West Valley Walk THIS Sunday, August 24th!

For more information and to RSVP contact Charlie at (520) 629-0050 or charlie@grijalvaforcongress.com

A great story out of the Beijing Olympics regarding former Maryvale High Panther Henry Cejudo.

BEIJING (AP) -- Henry Cejudo, the 21-year-old prodigy who had competed in only one world-level senior tournament before Beijing, won the gold medal Tuesday at Olympic freestyle 55-kilogram wrestling.

Cejudo, crying the moment the match ended and wrapping himself in an American flag, defeated Tomohiro Matsunaga of Japan 2-2 on tiebreaker and 3-0 in the best-of-three match. Cejudo was 31st in last year's world championships, his only prior tournament at this level.

Cejudo, the son of undocumented Mexican aliens who bypassed a college career to try to become an Olympian, assures of the United States of winning a freestyle wrestling gold for the ninth consecutive Olympics at which it has competed.

The work that Humane Borders does to prevent deaths of border crossers is beyond admirable. In fact, I would characterize their mission of providing water stations as saintly.

Unfortunately, it opens them up to attacks by neanderthals:

Approximately $3,500 in damage was caused after someone punctured 20 tires belonging to Humane Borders early Saturday.

All five of the vehicles were clearly marked as belonging to Humane Borders, but one vehicle that was nearby and not identifiable was left alone, according to Rev. Robin Hoover, president of the Tucson-based organization.

Posted by Unknown at 2:50 PM No comments: