Anyone know who paid for this gem? It's currently on display in Oracle, Arizona. 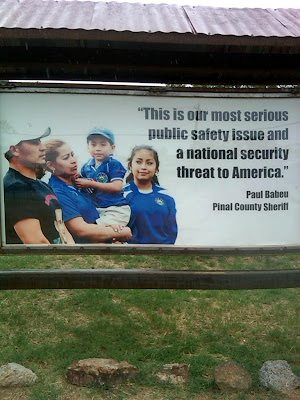 [UPDATE] The Pinal County Sheriff's Office says they are not responsible for it and don't know who commissioned it. Still looking into it...
Posted by Unknown at 3:23 PM No comments:

Email ThisBlogThis!Share to TwitterShare to FacebookShare to Pinterest
Labels: Arizona, race and racism 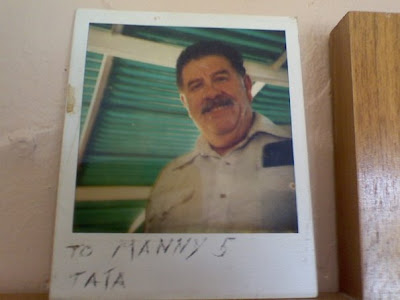 September 1st is a day that, for the past 15 years, has given me pause because it is the anniversary of my Tata Manuel's death. He was, and is, my hero.

He was taken from us far too soon in 1995 by pancreatic cancer that wilted a heavy-ish burro of a man into a frail calavera in less than a year's time. Watching him deteriorate was the saddest yet most profound eras of my life because he suffered with dignity and faith in God that had the power to unite my family in his memory through the present day.

When he was still in his strength, Manuel III would spend hours upon hours cleaning the graves of our family's ancestors and friends - making sure weeds were pulled, the tierra around the plot was raked, any trees/shrubs watered, and the forms painted a gleaming white. I recall that a great tia's grave had a water jug tied to the fence that surrounded her resting place.

"Well, mijo, it's in case your tia or anyone nearby gets thirsty and needs some water."

It made sense to me. This is Arizona, after all.

Ever since my tata's passing, my dad became the caretaker of all the graves with that endless cycle that promised that his dad's plot would be another added to the rounds. In speaking to my Nana earlier, she told me that my dad spent the evening scraping and painting the cemento around my Tata's grave for the anniversary - this was not a surprise because it's what we do.

I'm only a hundred miles from home, but it's relatively far considering that seven generations of my paternal line is buried within a ten minute drive of where my parents and last living grandmother live today. Each remaining generation taking care of the resting place of the previous. It's who we are...

...which means that pulling weeds is pretty much stamped into every speck of habanero in my veins.

So there I've been all week after work in the tierra that I arrogantly call: Mine. Pulling weeds, raking, pruning, watering - in anticipation for my 30th Birthday Carne Asada which is doubling as a CasitaWarming Party (a year later = Mexican Standard Time) - and on the 1st of September, I couldn't help but think of all the same work that's been done for generations in my family and the respect & love that fuels it; not knowing that 100 miles north my dad was fulfilling his responsibility to my Tata and all the Nanas and Tatas and Tios and Tias that preceded him.

Only I was having trouble.

The weedeater was not working on these weeds - they were too juicy and remained in place, mocking the 21st Century: "you wanna get rid of us, then bend that lazy spine and pick us with your hands!" A memory stirred, but not until I had lit a candle to remember my Tata that night, said a few prayers and went to sleep.

I was walking through rows of grapevines in Florence, Arizona, amazed that they could grow in the desert. Large clumps of succulent goodness in all sizes and hues. My Tata pointed to an older vine to the left and explained that the dried ones were raisins.

"Ohhhhhhh!" said my youthful self upon making the connection: that's where raisins come from.

Nana Mary had fallen behind as my Tata and I continued looking for grapes along the row to pick and take home to enjoy. She was poking around in the dirt at the base of the vines, looking at...something.

"Nana, what are you doing?"

"Nothing mijo, go with your tata"

And I woke up.

The thought process got rolling without the added benefit of café: "Could it be? Nah, that's too weird. Yeah, but it's been nearly 20 years since you've seen them raw, so it's possible. Thank God for Google."

The same weed that my Nana was hunting for all those years ago in the dirt of a vineyard just a stone's throw away from the dry Gila River has made itself quite comfortable in the rear portion of my yard. No wonder the weedeater was nearly smited earlier this week, that carpet of nutritious goodness was waiting patiently for me to remember.

Thanks for the reminder, Tata.

And Nana: it doesn't gross me out anymore that they're weeds because tan deliciocas con ajo, cebolla, cilantro y tomate - something that I'll never forget again thanks to Verdolaga Dreams.
Posted by Unknown at 1:25 PM No comments: