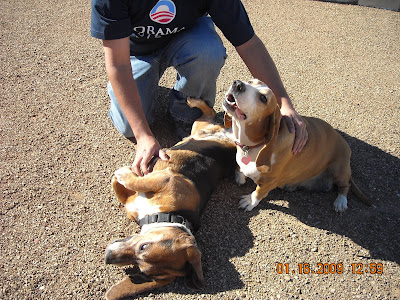 Bud was making his best attempt to get me to stay.

Then again, he has his girlfriend Bonnie
to keep him company at my uncle's house.

Hopefully there will be baby bassets in the near future.
Posted by Unknown at 2:42 PM No comments:

Yes, I'm going to be one of those crazy people you see on teevee at the inauguration freezing my desert-rat tail off. We're having low/mid-70 weather here and that will certainly not be the same environment I find when I step off the plane Friday night at National Airport.

I passed up the opportunity to go to the convention in Denver last August and promised myself that if Obama won, I would definitely be present at the inauguration. I can't even begin to tell you how relieved I am that it all shook out the way I hoped. It was bizarre to have the person I voted for actually win the presidency!

That being said, I've never considered President-Elect Obama a savior figure, as some on the right would characature. One of the biggest things that earned my respect during his campaign was his call to empowerment of the people. I honestly feel that the new activist base he's tapped in to must hold him and all power brokers accountable to the ways the policies of the government affect us all in the streets. There has been such a disconnect, especially over the past eight'ish years, that unless that whole relationship is repaired and mutual respect given back to The People (La Raza Cosmica...ahem), the democratic system in the U.S. will be forever tainted.

I'm honored, and frankly borderline giddy, for this moment in history.

The day after the inauguration I will be joining other human rights activists in the nation's capital for a show of solidarity.

A New Day for Immigration

We are living in a historic moment of change.

The election of Barack Obama has given the country renewed hope for just and humane immigration reform and worker justice.

On January 21st, we will celebrate a new America. We want to transform our society so that workers don't have to fear raids, families stay together, and no one lives in the shadows. We want workers to have the freedom to organize and demand fundamental change. Everyone in this country must be entitled to dignity and due process. Our country must welcome the contributions and cultures of immigrants from all over the world, and celebrate the vitality they bring to our country.

In our new America, we work together to rebuild our economy based on solutions that put the needs of workers, tenants and homeowners at the center of policy making. We need to heal the wounds wrought by 8 years of punitive immigration policies, end the raids, unjust deportations, and neighborhood sweeps that have terrorized immigrant communities and separated our families.

Join us on the first day of the new administration to celebrate this historic moment, and to renew our commitment to realizing just and humane immigration reform.

full details at A New Day For Immigration

On Sunday I will be attending the 2009 Latino Inaugural Gala featuring a slew of amazing musical artists like War, Los Camperos de Nati Cano, Lila Downs, Alejandro Sanz, Marc Anthony and others. I bought a ticket last week and then learned today that I won a raffle through Voto Latino for a pair of tickets at their invitation, so I will be able to bring my friend that I'm staying with for the week. Very excited for it and very appreciative to the generosity and hard work of the good people at Voto Latino who continue their work to empower and engage voters to participate in the civic process.

I'm also planning on going to the Netroots Nation YES WE CAN Party on Monday night, rendevousing with several friends that I've met online and some in real life as an extension of my blogging. As you can see, it will be a busy week of networking, celebrating, marching and living!

via The Indigenous Xicano, sombrero tip to Duke
Posted by Unknown at 2:03 PM No comments:

If God created the world in seven days, George W. Bush can definitely destroy it in less.
Posted by Unknown at 9:17 AM No comments:

Support the DREAM Act at Change.org

The second round of voting has begun at Change.org for the top ten ideas for change that will be presented on January 16th in Washington D.C. at a joint event with the National Press Club.

What is Ideas for Change in America?

Ideas for Change in America is a citizen-driven project that aims to identify and create momentum around the best ideas for how the Obama Administration and 111th Congress can turn the broad call for "change" across the country into specific policies.

The project was created in the wake of the 2008 Presidential Election in response to President-elect Barack Obama's call for increased civic participation in America. It is not connected to the Obama campaign or the administration.

Promigrant/pro-human rights activists were able to mobilize in great numbers to vault the DREAM Act to this next round, but we need your help to make sure it gets to the final list. Here is an excerpt of the submission:

Pass the DREAM Act - Support Higher Education for All Students

The problem: Many American students graduate from college and high school each year, and face a roadblock to their dreams: they can't drive, can't work legally, can't further their education, and can't pay taxes to contribute to the economy just because they were brought to this country illegally by their parents or lost legal status along the way. It is a classic case of lost potential and broken dreams, and the permanent underclass of youth it creates is detrimental to our economy. Former Republican Sen. Orrin Hatch has said: "In short, although these children have built their lives here, they have no possibility of achieving and living the American dream. What a tremendous loss for them, and what a tremendous loss to our society."

The solution: The federal DREAM Act (Development, Relief, and Education for Alien Minors Act), is a bipartisan legislation that would permit these students conditional legal status and eventual citizenship granted that they meet ALL the following requirements: