It's not Headline News that Lou Dobbs has a credibility problem as a journalist. He's long used his show on CNN as a platform to advance conspiracy theories. This particular gem is just one example:

“The invasion of illegal aliens is threatening the health of many Americans,” Mr. Dobbs said on his April 14, 2005, program. From there, he introduced his original report that mentioned leprosy, the flesh-destroying disease — technically known as Hansen’s disease — that has inspired fear for centuries.

According to a woman CNN identified as a medical lawyer named Dr. Madeleine Cosman, leprosy was on the march. As Ms. Romans, the CNN correspondent, relayed: “There were about 900 cases of leprosy for 40 years. There have been 7,000 in the past three years.”

Even more incredible is CNN's President, Jonathan Klein, endorsing Lou Dobbs this week after he jumped head first into the Birther Movement swamp, going so far as to label Rachel Maddow a "tea-bagging queen" today after she called out his insanity:

"It appears that Jon Klein stands alone as Lou Dobbs' sole defender in the birther battle. Even Bill O'Reilly and Ann Coulter have jumped ship," said Eric Burns, president of Media Matters. "How long will CNN allow Dobbs to devote airtime to a laughable conspiracy theory that even the most right-wing of media figures think is irresponsible?"

There's a petition that has gathered over 15,000 signatures calling for CNN to restore some form of credibility over their programs (I know, I know...). It can be found at DobbsConspiracy.com and offers this video roundup of Birthers being given traditional media attention:

As I tweeted yesterday, it'll be highly ironic if Lou Dobbs' career gets a signed death certificate as a result of questioning President Obama's birth certificate. Stay tuned.

Crossposted from Booman Tribune
Posted by Unknown at 11:41 PM No comments:

[Crossposted from Booman Tribune, where I'm guest-posting this week]

Pobre John McCain. With Sarah Palin back in the headlines, he's getting all nostalgic about what might have been. Rather than blame his failed warmongering ideology and erratic behavior for the drudging he received on Election Day, though, he's whining about brown folk being mean to him!

RAMOS: Are Republicans concerned about upsetting their base if they vote to legalize undocumented immigrants?

MCCAIN: I don’t know…uh…I can’t speak for all Republicans…I know I was out there twice — on the floor of the Senate with Senator Kennedy — trying to pass comprehensive immigration with a path to legalization on it and I was attacked during the campaign for being anti-immigrant. Life isn’t fair.

RAMOS: Talking specifically about that — the last time we spoke was during the campaign. And you know and I know that you only got 31% of the Hispanic vote. Are you disappointed? What went wrong?

MCCAIN: Obviously I’m very disappointed. Millions of dollars of attack ads on your network and across the country in Spanish-language stations attacked me for being anti-immigrant, anti-Hispanic, and anti-immigration reform. They succeeded.

Republicans don't want to talk about why their party is becoming whiter and more male dominated. To them, the onus remains on those people to cross the bridge to them, paying no attention to land mines put in the path. This strategery is already failing and will continue to do so if the numbers continue to reflect a more diverse voting population:

According to census data, 66 percent of whites voted in November, down 1 percentage point from 2004. Blacks increased their turnout by 5 points to 65 percent. Hispanics improved turnout by 3 points, and Asians by 3.5 points, each reaching a turnout of nearly 50 percent. In all, minorities made up nearly 1 in 4 voters in 2008, the most diverse electorate ever.

Democrats shouldn't rest easy, however, because a mistake both party establishments make is assuming that communities of color can be pandered to by talk with no walk, or treated like unthinking masses altogether.

The latter is the fatal mistake made by the GOP. They assume that if 95% of black voters and 67% of latino voters pulled the lever for Obama, then it must be because we were showing solidarity for another darkie by default! John McCain blames spanish attack ads for losing the latino vote, which proves (again) that he is out of touch with us:

This post is not really about John McCain, is it? It's about a political establishment that is consumed by maintaining a thick level of insulation from voters' needs. The look of shock on their faces when they see that minorities share many of the same concerns as the wider population is amusing to watch unfold; and you could knock them over with a slight breeze if you told them that they could reach latinos using English-language media.

With a Census looming next year, and data that will undoubtedly show more representation of Latinos, African Americans, and Asians as part of the larger population, life will continue to be unfair to any elected official who supports policies that affect our communities detrimentally; or treat us as uppity when we demand an equal voice at the table.

Posted by Unknown at 3:13 PM No comments:

Any bets on who will be the first GOP Judiciary Committee Member to scream, "ARRIBA! ARRIBA! ANDALE! ANDALE! at Judge Sonia Sotomayor? You might think that's a far-fetched possibility, but you'd be wrong:

'cuz, you know, Cuba and Puerto Rico are both ISLANDS! Full of brown people! Who speak ghetto!
Posted by Unknown at 9:11 AM 1 comment: 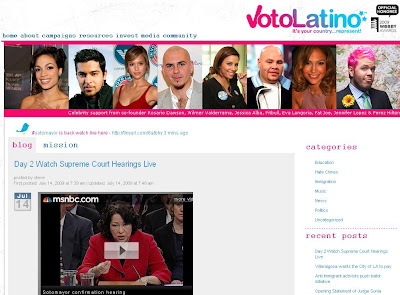 Congratulations to Voto Latino! They launched the reinvented blog this week as well as a new url. Update your bookmarks - http://www.votolatino.org/blog
Posted by Unknown at 8:40 AM No comments:

When Sonia Sotomayor was nominated by President Obama to replace Justice Souter on the Supreme Court back in May, I wrote the following:

...as we'll see in the coming days, she is an "intellectual lightweight" despite having a long and stellar career on the bench. She will be attacked as a person of color who has the audacity to uphold affirmative action laws not because they're the law, but because she's looking out for her people. The media's whiteness will show in all its unholy glory.

An example of this mindset can be found during today's broadcast on NPR's Morning Edition. Ed Whalen, President of the Ethics and Public Policy Center, wasted no time on getting that talking point out into the mix right at the onset. There will be no holds barred with this nomination process.

The conservative movement's success at derailing Sotomayor's placement on the Supreme Court is hinged on causing white backlash against her identity and making her out to be a token latina/affirmative action candidate instead of the qualified, capable judge that she has proven to be over the years.

As a blunt blogger friend of mine likes to say, "Bet on it."

What I should've wrote was, "the GOP's whiteness will show in all its unholy glory". Witness their party leader, Rush Limbaugh, during today's broadcast as the Sotomayor hearing commenced on the Hill:

It's almost comical that the GOP decided that the best way to attack an accomplished Latina judge was to claim she's racist. Projection, much?

Rush Limbaugh is not an elected official, but he is a go-to venue for conservatives to preach to their base, and Senator Sessions, who is leading the Republican questioning of Judge Sotomayor during the hearings clearly has his Limbaugh-approved talking points:

Jeff Sessions began his statement by saying he hoped the confirmation hearings would be "the best we've ever had," before launching into a laundry list of terms being used by conservative activists to discredit Sonia Sotomayor: "bias," "prejudice," racial quotas. Sessions touched on every right-wing bugaboo from the court, from the influence of foreign law and the court "created a right for terrorists captured on a foreign battlefield to sue the United States in our own country" to property rights. Sessions fretted that the court would be "corrupted" by Obama's view that "the depth and breath of one's empathy" is an important quality for a judge.

In response to the idiotic blatherings of the GOP and their defacto leader, Rush Limbaugh, Presente.org and the Progressive Change Campaign Committee have launched the following spanish-language ad to build political opposition to the Right's irresponsibility.

"Sonia Sotomayor is set to be the first Latina, and the first Puerto Rican, to serve on the US Supreme Court. It is a proud moment for our community. Yet Republican leaders insist on attacking her:"

"She doesn't have any intellectual depth. She's got a -- she's an angry woman, she's a bigot. She's a racist."

It's insulting to all Latinos and Americans.

We asked Republican Congressman Adam Putnam if he would denounce Limbaugh's words. He refused to reply. Let's put a stop to the hate. Call Congressman Putnam today at 863-534-353 and tell him to condemn this language.

This ad was paid for by Presente Action

I'm pleased to endorse this ad campaign and hope that the GOP understands that they do lasting harm to not only communities of color by fanning racial divisions, but also their political future.

Operating Gringo sounds like an appropriate name for it.
Posted by Unknown at 8:00 PM No comments:

July 1st came and went and it wasn't until a few minutes ago that I realized, "OH crap! The site's anniversary!"

So I'm gonna take a cue from the GOP leadership of Arizona's State Senate and pretend that it's not really the 2nd of July if I ignore all the clocks and calendars.

Four years. Wow. I think about the ways blogging has changed and evolved in that time span and am excited for what is possible. I haven't posted nearly as frequently here as I did in the past, but my blogging/activism hasn't slowed down at all. In fact, it's probably increased. Twitter has everything to do with it. Facebook, too.

This site was always about getting more eyes on a worldview that connected with the reality I experience as someone with morenito skin con una identidad sin fronteras. Immigration has obviously been a big part of the radicalizing I've undergone the past several years. With anti-migrant hate remaining out there in strong potency, and racist blowhards aplenty who conflate "latino" and "illegal" with descriptors like diseased/criminal/drugged-out/drug-pushing/etc etc etc, keeping on that beat remains very personal.

The nature of my blogging and activism has changed, but the spirit that sparked my entrance to the web pueblo remains the same:

I started this site to get my voice down on "paper". I don't really care if I get five or 500 hits in a day. I'm doing this because I care about my country. I yearn for the days when we can again proudly live up to this inscription that can be found on the Statue of Liberty:

"Give me your tired, your poor,
Your huddled masses yearning to breathe free,
The wretched refuse of your teeming shore.
Send these, the homeless, tempest-tossed to me.
I lift my lamp beside the golden door."

In the near future, this place will have a new voice added to the mezcla. She's Xicana, una feminista, una amiga mía and more importantly, completely unknown to all the blogging crowds and circles I've known over the past several years. Knowing her in real life is never boring so this should be quite the paranda. ¡Cuidado! haters. Lou will whup your ass.
Posted by Unknown at 2:23 PM No comments: