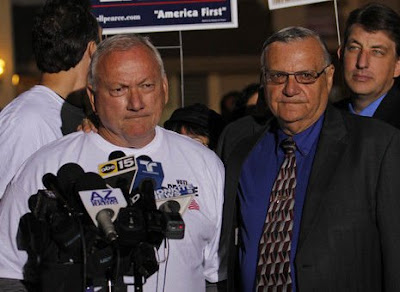 Now he can spend more time palling around with his National Alliance friends.

In an apparent rebuke to his hard-line politics, Arizona state Senate President Russell Pearce was recalled by voters Tuesday. Senator Pearce was the author of the state's tough anti-illegal immigration law that has spawned copycat laws in several states from Utah to Alabama.

Senator Pearce's crusade against illegal immigration made him a national icon but ultimately factored into his historic recall.

His defeat, at the hands of political novice Jerry Lewis, puts a different face on Arizona and signals that voters are ready to take state politics in a new direction, says Bruce Merrill, a political scientist and professor emeritus at Arizona State University in Tempe.

“Most Arizonans are pretty moderate, and I think they just got tired of all of the venom and all of the bitterness,” he says. “It really became more – to some degree – that Russell Pearce was somewhat of an embarrassment.”

Posted by Unknown at 2:21 PM No comments: