C'mon Russell. Didn't you learn in Boy Scouts that if you keep playing with fire, you'll eventually get burned?

A week after Rep. Russell Pearce drew fire for immigration remarks many called racially insensitive, the Mesa Republican sent an e-mail to supporters in which he copied an article from a white separatist group and a link to that group's Web site.

Pearce says he immediately sent two apologies to supporters after sending out the e-mail, claiming that he did not know what the group was and had not read the entire article before copying it into his e-mail.

"My heart is really hurt to think something like that would go out under my name," Pearce told The Republic today. "I was very embarrassed I didn't have better diligence and read the whole article."

Gotta love the pickles that the Republicans keep putting themselves in lately. Pearce has either revealed his true racist intentions behind his long-standing hard-right immigration tantrums or he's proven to be a lazy legislator who doesn't even take the time to read his correspondence before sending it out to his supporters as "proof" that he's on the right track.

The group Pearce endorsed was none other than the odious National Alliance. Here's a taste of the hate they spew

Disney was the last major studio to be seized by the Jews and Walt Disney fought them. Now a battle is being waged in the city that is the home to Disneyland in a way Walt Disney never imagined.

It’s not just the Mexican invasion that is the problem in California, the Jews are now fighting with the Arabs over the corpse of "the Golden State.".

For so many years, the Jews in California, Hollywood/Tel Aviv West, have had their way. But then the Arabs set up a place in Orange County referred to as "Little Gaza," which according to the 2000 Census has more than 24,000 Arabs.

And speaking of endorsements, this little stunt by Russell "Bring Back Operation Wetback" Pearce has caused his list for re-election to lose at least one prominent name

Given the regrettable and disturbing nature of the email Russell Pearce circulated earlier today, I cannot in good conscience lend my endorsement to his candidacy for State Representative. While Russell has issued an apology for his email, I nonetheless will not be associated with any communication that contains anti-Semitic remarks.

I echo the question asked by my fellow Az Blogger: Does Trent Franks feel it's politically prudent to remain on the endorsement page of Russell Pearce's re-election website? 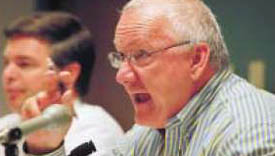 And while we're at it, how many "macaca moments" are the Mesa voters going to take before they realize that Pearce is a divisive, immoral legislator who deserves to be retired permanently in exactly one month?

Enough is enough, people. The Minuteman Wing of the Republican Party, which includes Randy Graf (in the photo with Pearce) and JD Hayworth, regardless of his feeble attempts to distance himself from Pearce, has given cover to white separatist groups like National Alliance for far too long with their enforcement-only approach to immigration reform.

You might not be racist if you support things such as mass deportation, building the Great Wall of Arizona™ or the militarization of the backyards of Baja Arizonans, but how's your conscience treating you knowing that you hold the same political positions as true racist groups like National Alliance, Border Guardians and the KKK's David Duke?

We need comprehensive reform of our immigration system. One that respects humanity regardless of which side of the border your citizenship lies and it must address the underlying economic issues that are plaguing the lower classes of all the nations involved.

Crossposted at Migra Matters and Booman Tribune
Posted by Unknown at 7:20 PM