SB1070: Racial Politics and the Boycott 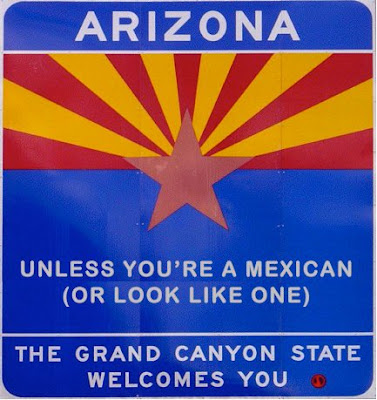 If anything is clear, it's that the language of Arizona's SB1070 was written so vague that it's possible for anyone who is capable of thought to have an opinion on how it could be implemented.

She is pretending like racial profiling never happens and the brown menace is simply working ourselves into a frenzy in order to race-bait the white folk and score cheap political points through the lamestream media so that Barack Obama can keep palling around with Kenyan terrorists. Or something:

In an interview with Fox News’s Sean Hannity — who introduced the segment by accusing “pro-illegal immigration” protesters of not actually reading the legislation — Sarah Palin said “there is no ability or opportunity in there for the racial profiling” in the law.

Critics have argued that the broader powers of law enforcement officials to stop and question suspected illegals who would, with this legislation, be considered to be “breaking the law” if they are in the state, will inevitably lead to racial profiling.

Palin, however, denied these claims.

Closer to Arizona, however, the adjective racist is being used quite commonly to describe Arizona's Shame: SB1070

Grijalva, speaking at a rally Sunday at the Arizona state Capitol, asked Obama to not cooperate with the law, according to the Associated Press.

Watching the debate unfold across this country, the reaction I've had most commonly is: "Wow. How very white of you."

Here's a perfect example from a usual suspect as he reacts to my brown Congressman of Mexican descent:

REP. STEVE KING: Well, it looks like the case is that, that he's trying to scare the businesses out of Arizona, or he's trying to get the businesses to change their position and press the legislature to reverse the law that was just signed by the governor the other day. I'm wondering if we look at the map of Congressman Grijalva's congressional district if we haven't already ceded that component of Arizona to Mexico judging by the voice that comes out of him, he's advocating for Mexico rather than the United States and against the rule of law, which is one of the central pillars of American exceptionalism.

You know what that sounds like? The same hate speech that comes from white supremacist vigilante groups that terrorize the border region. It's that same tone of dismissal that people of color hear everyday. "Oh, there he goes again, advocating for his own kind."

Well, here's a white guy that agrees with Congressman Grijalva:

Pima County Sheriff Clarence Dupnik tells KGUN9 News that SB 1070, Arizona’s crackdown on illegal immigration, is a “racist law,” and says he has no intention of complying with it. In doing so, Dupnik becomes the first major local law enforcement official to officially rebel against the bill since Governor Jan Brewer signed it into law on Friday.

Dupnik told KGUN9’s Steve Nunez that the law is “disgusting” and “unnecessary.” Dupnik said his deputies plan to keep on doing what they’ve always done. He said when illegal immigrants wind up in his custody, his deputies will detain them for federal agents, but will not take them to the county jail.

Dupnik said he realizes that, under the terms of SB 1070, he could get sued for failing to comply with the law. But he indicated that’s a risk he’s willing to take. Dupnik insisted that federal law supersedes state law.

Sheriff Dupnik and Congressman Grijalva share a wide swath of the same jurisdiction in Southern Arizona. We are a region that respects our indigenous roots and culture. In fact, we pride ourselves in celebrating all of the representative traditions among our people at every opportunity. It drives conquistadors like Steve King and Russell Pearce nuts.

Let's stop pretending that SB1070 will be enforced the same for a white snowbird in Scottsdale who decided not to the leave the state during the summer versus a Xicano family that's celebrating a child's birthday at Peter Piper Pizza. The whole concept of "attrition through enforcement" is nothing more than a fancy term for ethnic cleansing.

When outsiders get up on their platforms and sneer down their noses at the living mestizaje found here, especially those who insist on passing laws to disrupt our way of life, you can bet a truckload of apple pie that there will be resistance; because we have been targeted for a long time by federal immigration enforcement on land that has been home to our ancestors for centuries. Our skin color, our accents, our language are all suspect to an oppressive federal system that SB1070 expands unjustly.

For several years I've been told that I should keep my mouth shut and accept that I'll be profiled since so many brown people migrate to the U.S. to steal jobs provide for their families. "Sacrifice for the greater good", I'm told. Well, I have come to a place where I can agree to do that.

I stand with Congressman Grijalva on a boycott of Arizona.

It will be painful for our economy that is barely starting to recover from the Bush Recession, but in order to force the conservatives in power to take racial justice and equality serious, we'll need to translate the message into their mother tongue: money.