Nativism in the Congress

Tom Tancredo, who is already well-known around here, continues his dangerous rhetoric. This time the target of his ire are border communities who have the audacity to exert their influence on what happens within their jurisdiction (and he calls himself a conservative. pffft)

“These mayors are jeopardizing national security with their not-in-my-backyard attitude,” Tancredo said. “Congress approved the border fence with the overwhelming support of the American people to protect our nation from terrorists and illegal aliens and it will not be thwarted by a handful of rogue mayors.”

The outspoken Tancredo, who is polling in the low single digits in national polls, also offered his solution to the problem, which is to “build the border fence north of these communities.”

Belly rubs to any corporate media journalists who ask Tom if he supports the death threats that are being aimed at the El Paso mayor since he has no trouble calling Mayor Cook and other border community officials traitors.

And since the congressman and Republican presidential candidate is presumably mentally fit for the highest office in the land, despite the precedent of the dim bulb that currently presides in the White House, it should be pointed out that if the supporters of the Great Wall of America™ have their way, much of the wall will, in fact, be north of many locales in the United States.

The border isn't exactly an east-west line. Residents in every border state, south of the Yumans in Yuma, could presumably travel north to get to Mexico. 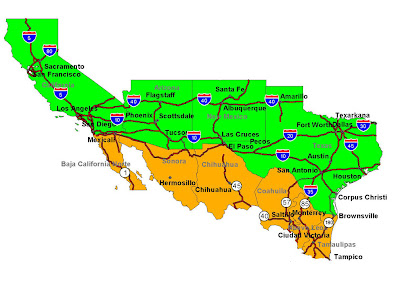 Just some food for thought as the ignorance of the nativist wing of the United States continues unchallenged by the mainstream media.