The whitewashing of centuries of bi-national identity continues.

The Mexican flag flies no more over the Arizona-Sonora Desert Museum — and the U.S. flag is gone, too.

The museum's board of trustees voted to remove the flags — which had flown side-by-side since 1954 — after receiving complaints and threats about flying the Mexican flag.

Questions from visitors about why the Mexican flag was being flown on U.S. soil escalated in the past couple of years, said board chairwoman Sophia Kaluzniacki.

An anonymous death threat against the museum's animals made earlier this year by a phone caller also factored into the board's decision, but to a lesser degree, she said. The desire to avoid controversy on border-related issues was the main thrust, she said.

The Sonoran Desert is clearly unpatriotic! How dare it exist without respect for the sovereignty of America™ If we let infractions like this stand without opposition, the terrorist prairie dogs will win. 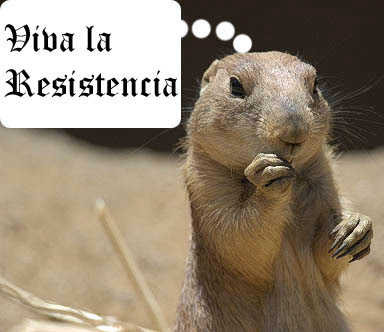 Email ThisBlogThis!Share to TwitterShare to FacebookShare to Pinterest
Labels: Cultura