Wherein I'm Attacked By A Winged Spawn of Satan

Living in the desert, one gets used to co-existing with various creatures - Snattlerakes, tarantulas, mountain lions - it's just part of the package. You learn to not even think twice about shaking out your shoes before putting them on, in case a desert hairy scorpion has decided to burrow, or checking your cocoon of sheets before bed to make sure a wolf spider hasn't decided to spoon with you for the night.

You just do these things - it's automatic.

However, I was certainly not prepared for the preemptive strike that was launched on my life last night as I emerged from my door to get the mail. 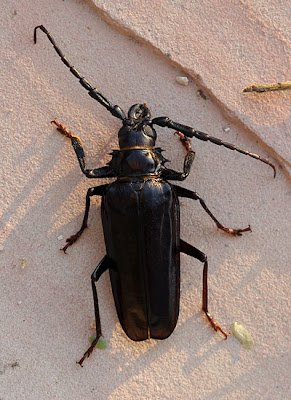 The dreaded Palo Verde Root Borer was on the prowl.

This specimen was clearly an older adult, because it was at the upper-end of the size-scale for these winged creatures of the monsoon season (5.75 inches) I'm not sure who scared who the most, but when I opened the door it hopped up in flight and made a beeline for my head.

After screaming like a banshee because I thought it was a spider (severe arachnophobe here) - I extracted it from my kitchen that it had just flew into after nearly missing my head, and went on with my business.

To be honest, I was surprised to see one so early. Usually they are more active after the rains come, but not this bugger. It was acting as if we had just been hit with the Nothing.

Over at The Firefly Forest blog, they have (had) this to say about these gargantuan beetles

Paloverde Root Borers, as evidenced by their unusually long antennae, are members of the Longhorn Beetle Family (Cerambycidae), and like many other longhorn beetles, they are quite destructive. Their plump, white, 5 inch (12.7 cm) long larvae (commonly called grubs) eat tree roots, especially those of paloverde trees, such as the Mexican Paloverde (Parkinsonia aculeata). Paloverde Root Borer grubs will also feed on the roots of other trees besides paloverdes, and the damage these voracious grubs can cause to a tree’s root system can prove fatal.

Using teh Google, I love how just about every entry talks about the futileness of getting rid of these winged spawns of satan. The question is: should I charge the little beasties a portion of my rent?
Posted by Unknown at 11:28 AM