Toy Soldiers for the Infantile (P)resident

This made me chuckle

Gerardo Fernandez, a spokesman for Mexico's leftist Democratic Revolution Party, arrived in Merida on Monday with a bag of toy soldiers he wanted to leave at Bush's hotel so he could "play war and leave the world alone." When he couldn't get through security, he climbed a rusty metal barrier and threw the plastic troops into the secured area.

What are some other ingenious ways to protest Shrub? Aside from calling in Mayan priests to re-sanctify the tierra desecrated by his very presence.

Here's an idea: let's pelt him with lettuce since he is so fond of picking it alongside lowly subjects of his corporatocracy.

They toured an American military center that provides basic medical care and physician training. He and Laura Bush handed out hygiene kits at an elementary school. And the president helped to load lettuce headed for the global market onto a truck at a farmers' cooperative.

That, he said later, was ''one of the great experiences of my presidency.'' 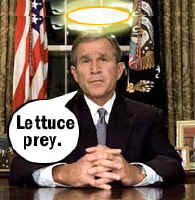